Today, I went to watch a series of six ten-minute (or so) musicals with my friend Christine.

While walking there, we were on a narrow sidewalk and sort of blocking the path of a short guy (read: my height) in a suit. He seemed in a rush, so we scooted out of the way, and he slips past us and into the theatre.

Christine kept telling me, “I know the guy from somewhere!! I just don’t know where!” Theatre program says he used to be on Sabrina the Teenage Witch, as one of Sabrina’s college roommates. I said, “What? Who? Sabrina the what?” but Christine waved me off, and assured me that it qualified as a celeb sighting.

The dude, in the purple shirt: 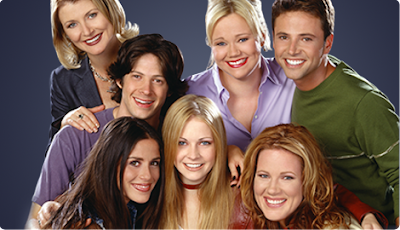 And so went my C-list celeb sighting of the day. Christine and I had a good laugh: we saw the guy from Sabrina! (That said, he sang/acted really well in his three-person musical, much better than the other two rather wooden actors)

It was a fun musical series. We had good seats. Second row, in the middle! (There were only five rows, but whatever, let me have my moment.) Oddly, the last musical (conga lines! rock stars! multiethnic!) was the worst. I’ve seen high school skits that were better.

That was a pretty bad TV show, too.